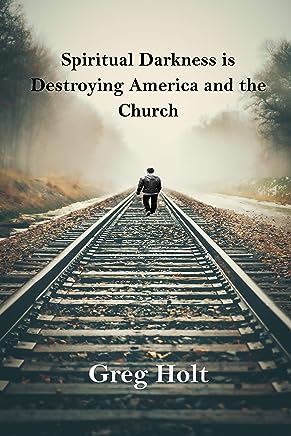 Author of “The Narrow Road”

What has happened to America and Christ’s Church? That is the question many of us have asked and Greg Holt, in his first published book, answers that question and many more in, “Spiritual Darkness is Destroying America and the Church.” How did this happen and what role has the church played, if any, in the seemingly demise of our country? Greg answers this and much more with candor, honesty, and scripture. Greg writes with boldness and does not “soft-peddle” his answers as he covers topics many churches refuse, or are afraid of offending, to preach about; gay “marriage”, transvestite, abortion, what is sin? is only a few that he discusses and what God says about them.

Greg states, “The church was a place of refuge, a hospital for the spiritually sick, a place of hope, a place of love, and a place dedicated to Christ and the advancement of Him.” What happened to those churches and how has America and the church been changed now versus those from long past days, or have they? Find out the answers that may, or may not, surprise you.

I highly recommend this candid and thought-provoking book to all American’s and especially those who call themselves, “Christians.”

“Wake up America!” is a vast understatement!

Every time Cato the Elder (born 234 B.C.) spoke to the Roman Senate, whatever the subject, he ended each speech with, “And Carthage [on the coast of North Africa] must be destroyed.” After many years, Carthage was defeated and destroyed. Carthage had been defeated twice before but quickly rebuilt, revived, and returned to threaten the Roman Republic. So Cato thought it best to destroy them for good. This was accomplished in theThird Battle of Carthage in 146 BC, and the cities’ entire remaining population was sold into slavery, consequently it never again posed a threat to Rome.

Target must be destroyed, not just boycotted and humbled into submission regarding their love affair with the LGBT crowd. Target’s statement said, “We welcome transgender team members and guests to use the restroom or fitting room facility that corresponds with their gender identity,” the retailer said. “Everyone deserves to feel like they belong.” No, everyone deserves to be protected and have privacy; and the situation of sexual predators with a camera in female restrooms is not protection or privacy.

Now, there should be no mistake about Target’s rights in this matter. They have every right to do exactly what they are doing. I have advocated many times for the right of business people to run their business without government interference. They should be able to open and close when they desire, hire whomever they please, sell to whomever they please, pay any amount they want, and fire anyone for any reason whenever they choose. This is assuming there is no contract. That is the way America used to be. Moreover, I have every right to disagree with all their decisions, despise all their products and have the right to tell all my friends that it would be a wise decision, in my opinion, to never shop there again. That is also freedom and it does not conflict with any biblical principle.

I support the present boycott of Target; however, it is not a winning strategy. If we hold to the boycott and it grows with intensity until Target’s parking lot is almost empty then Target’s CEO will be forced to back down, but we will have only won a temporary victory. My desire is that Target should be destroyed even if they relent (not the same as repent) and ask to be accepted back into decent society again. However, I say that there should not be a rush back through their doors as if Target had not declared war on our women and girls.

I don’t want to be misunderstood. I do not agree with Rome’s total war of elimination at Carthage, but we should pursue the Target boycott all the way to bankruptcy! In our “war” with Target, Coca-Cola, Pepsi, Ford, Disney, and hundreds more, we should not be motivated by hate or self-righteousness but by principle: those groups chose the wrong side in this cultural war; and they must take the consequences. For sure, I want my grandchildren and others to know what side I was on; and, with Target, I want their failure to be an example for others since I am interested in victory not a truce.

Critics will suggest that that is unchristian since the theme of the Bible is redemption; however, that is for persons, not entities. Others are free to rush back to Target but I choose not to do so, even if Target’s CEO weeps copious tears, throws dirt over his head, and rips his Brooks Brothers’ suit on national television. I believe the boycott should not cease! At least if we are serious about winning this cultural war. After a few years, if Target walks the walk I might reconsider my decision. Others will choose to make various decisions which is everyone’s right. And it might help in my decision if their checkout ladies started dropping a KJV Bible into each shopping bag.

When considering the status of America, the power of the LGBT lobby, and the brainwashing of Americans, I believe the best procedure is to sacrifice a business–that frankly does not deserve any consideration–and leave its wreckage along the business highway as a warning to others: don’t think you can disregard the people whose ancestors build this nation–without paying a price.

People have a right to expect God to fulfill His promise of redemption but businesses don’t have that right. When Target goes belly up, it will send a loud message to other businesses that it is not wise to use perversion to antagonize principled people.

Numerous businesses need to get the message that decent people will not accept perversion as normal or a female restroom being used by a man who thinks he is a female. If a business wants to be LGBT friendly, that is one thing but to take an aggressive, asinine, and arrogant anti-family position as Target has done, is another.

Let me assure everyone that the road to America’s moral garbage dump is paved with bad intentions. The Perversion Lobby wants to destroy your way of life. A successful boycott is a way to make a difference instead of whining about our “mistreatment.”

Hey, even a dog knows the difference in being stumbled over and kicked around. We have been kicked too many times and we expect acknowledgement and respect as we make our purchases. We will take public action to make the anti-family crowd feel our muscle at their cash registers. It’s a matter of principle. If Target goes bankrupt, it will be a lesson to others that they reaped what they sowed and it will be an example to others not to jump on the LGBT bandwagon.

Even the dullest of business leaders should get the message: choose your friends carefully.

I hope and pray that this boycott is as permanent as Rome’s success at Carthage.

(Dr. Don Boys is a former member of the Indiana House of Representatives; ran a large Christian school in Indianapolis, wrote columns for USA Today for eight years; authored 15 books and hundreds of columns and articles for Internet and print media publications; defended his beliefs on hundreds of talk shows. These columns go to newspapers, magazines, television, and radio stations and may be used without change from title through the end tag. His web sites are www.cstnews.com and www.Muslimfact.com andwww.thegodhaters.com. Contact Don for an interview or talk show.)

Don Boys Ph D
Dr. Don Boys is a former member of the Indiana House of Representatives; ran a large Christian school in Indianapolis, wrote columns for USA Today for eight years; authored 15 books and hundreds of columns and articles for Internet and print media publications; defended his beliefs on hundreds of talk shows. These columns go to newspapers, magazines, television, and radio stations and may be used without change from title through the end tag. His web sites are http://www.cstnews.com and http://www.Muslimfact.com and http://www.thegodhaters.com. Contact Don for an interview or talk show.
http://donboys.cstnews.com/

The views expressed herein are the sole responsibility of the article’s author, or of the person(s) or organization(s) quoted therein, and do not necessarily represent those of The Olive Branch Report.

The young —- To learn how to live.

The ignorant —- For wisdom.

The learned —- For humility.

The rich —- For compassion.

The poor —- For comfort.

The dreamer —- For enchantment.

The practical —- For counsel.

The weak —- For strength.

The strong —- For direction.

The haughty —- For warning.

The humble —- For exaltation.

The troubled —- For peace.

The doubting —- For assurance.

The sinner —- For salvation.

The Christian —- For guidance.