If I died today, would I go to heaven?

What qualifies me to enter heaven?

These are two important questions to ask both Christians and non-believers. No one wants to think they will spend eternity in hell and many just assume they will go to heaven. Not all will! The answer can determine our destination.

“My children are to be ready for My appearance shall be soon. My anger is without limits! Your Government leaders shall reap their rewards for they have led America astray.

Pray, My children, for the time is short for those who’s sins are mountains high. Let not the world turn your hearts for I am the I AM and I will pour out my wrath that ALL shall see My glory. EVERY knee shall bow and confess I AM is Lord of lords and King of kings.”

“The Lord God Almighty, Holy is His Name. King of kings and Lord of lords His Name shall last forever. Bow before Him all ye in worship and praise for He is above all gods.  There is none above Him. Holy, holy, holy, is His Majesty on High.

All the world is at His feet. All bow before Him. Let ye nations come to Him in humble submission. Bow your heads in shame for your demise is soon to come.

The rivers shall dry, the seas recede. The heavens open and all hell shall bow in humble adoration for His presence shall bring you to your knees.

Let not the serpent cast his spell for all will see the end of time. His teeth marks shall leave their marks yet those who believe will have the nail marks upon their hearts.

No man can withstand My power. No man shall…

It will happen in a moment, in the blink of an eye, when the last trumpet is blown. For when the trumpet sounds, those who have died will be raised to live forever. And we who are living will also be transformed. (1 Corinthians 15:12)

Relate: Some day this verse is going to be fulfilled. Some day those graves are going to open and both the living and the dead will meet our God. There is debate as to exactly when it will happen. Some say at the beginning of the tribulation. Others say at the middle or the end of it. Even the whats and hows are the source of endless fun and debates and best selling (yet horribly written) book series. That is fine. Some people like to invest plenty of time creating end times charts and timelines. These… It is all too human to compare ourselves with others.  She has better hair.  He has a better car.

Even Christians do this…whether they should or not [1].  Oftentimes, the comparison is in spiritual terms.  He is always speaking up at bible study.  She has headed the Christian women’s group for years.

This, of course, is foolishness.  We may be able to count our blessings.  But we cannot calculate our spirituality.

We cannot grade our relationship with Christ any more than assign a numeric value to our other relationships.  There simply is no formula.  How often should a good husband take out the garbage?  How tall is a good wife?

Paul said, on this subject:

“For we dare not class ourselves or compare ourselves with those who commend themselves.  But they, measuring themselves by themselves, and… 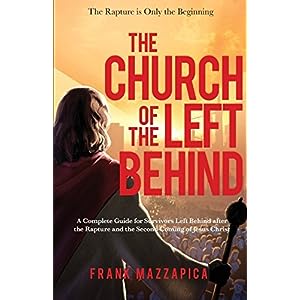 Not all humans are going to be spending eternity with the Lord Jesus Christ in heaven. When He comes with the blowing of the trumpet there will be many that are left behind as the true followers of Jesus Christ meet Him in the clouds.

We hear little, if anything, about what life will be like when the believers are gone. Using scripture, the author gives a very clear and thorough picture of the aftermath of the apocalypse, specifically the mortal’s life on earth after the great tribulation and the second coming of Jesus Christ. These are the men and women who have missed the rapture of the church and will live during the thousand-year millennial reign of Jesus.

I recommend that pastors, as well as believers and -especially non-believers- read this. It could change your final destiny.

“There are those who bow before Me, who kneel at My feet at the foot of My Throne. They shall see the Kingdom of heaven and fear no more.

There are those who fear Me, not in reverence but fear what I will do as their punishment for their non-belief. They should fear, but not from Me. Their choices are the culprit of fear. “What will they think?” “What if I lose my job? The baby gets sick, the care breaks down?”Each has their own set of fears. But “Do not be afraid for I am with you” has no impact. Self is their hope, humans dictate their lives.

There is no purposeful future for those who know Me not. I am the future. I am the present and the past if My children come unto Me. My grace is sufficient and I am the merciful God who loves and…

WRITTEN BY JOE CRUZ (2 DAYS AGO)

Obama recently dropped a bombshell on Americans when he used an executive action to expand his authority and quietly signed the order called National Defense Resources Preparedness which puts our nation in a permanent state of martial law that only needs to be activated by the President, whenever he should so choose to do so.

The base of the action is the Defense Production Act of 1950 which was created due to the Korean war, however this latest power grab by the president greatly expands on the authority that was granted in that act and basically allows the government to take over and control every resource that’s available at the time of the declaration.

A frightening aspect of the latest version is that acts of aggression towards the United States homeland by outside forces is no longer required in order for implementation. Obama’s version states specifically that it can apply during peace time as well, and that all actions specified within the order are under Obama’s direction.

The “integrated policy making forum” for all Order policies consists of Janet Napolitano and the National Security Council.

The entire economy will come under the president’s direction once the order is implemented and he will issue regulations establishing nationwide procedures and standards of production. This will include the control of “general distribution of any material (including applicable services) to the civilian market.”

Additionally all manufacturing will cease unless approved by the president and anything that is produced the government will be given first rights to. It will also give the administration the authority to seize private companies and facilities and modify or change they way they operate as it sees fit, which pretty much means that private business will be told what they can make, how they’re supposed to make it, and when they have to make it.

Civilian transportation of all types will also fall under its control along with food supplies, all forms of energy production, farms and farm equipment, water resources, and all healthcare resources.

Within it FEMA camps are also mentioned and given the authority to carry out emergency preparedness mandates as specified in the Robert T. Stafford Disaster Relief Act. The act is what created the ‘temporary housing’ facilities for people who have been displaced which we all know as FEMA camps.

Such changes to something should be enough to send chills down the backs of Americans nationwide. There’s no need for the complete takeover of the nation during times of peace under the guise of ‘national defense’ no matter which way you look at it so one has to wonder, what do they know that we don’t?